Staged readings in the Studio 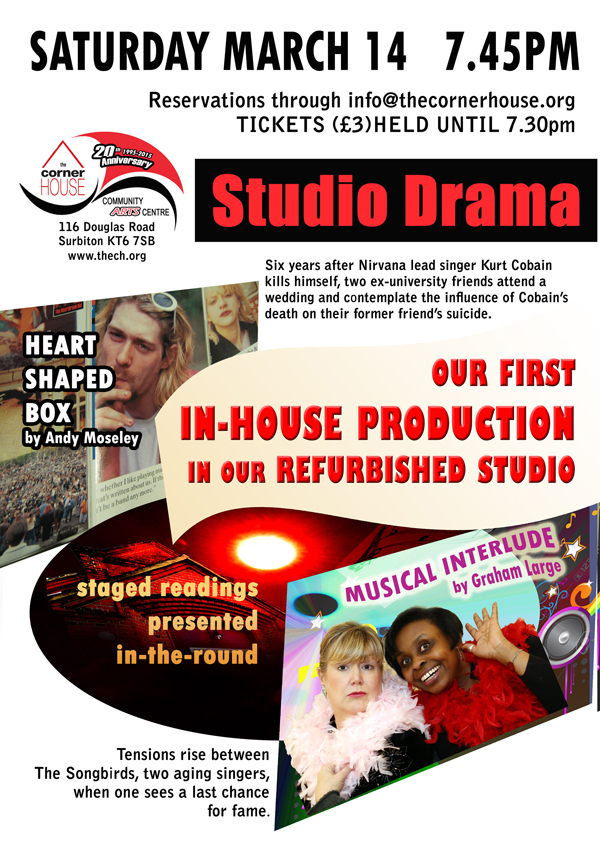 Friendship comes under the spotlight in two oneACT plays which come to the cornerHOUSE as part of a double bill on March 14th. Musical Interlude is a touching new comedy by

Friendship comes under the spotlight in two oneACT plays which come to the cornerHOUSE as part of a double bill on March 14th.

Musical Interlude is a touching new comedy by Graham Large, whose previous oneACT play The Visit, was a big hit at last year’s cornerHOUSE oneACTS festival. In the play, the tensions between two ageing singers surface over their past successes and their future ambitions. Hubris, white lies, and mistaken assumptions lead to comic and poignant moments.

Heart Shaped Box, is a drama written by Andy Moseley writer of previous oneACT plays Are You Lonesome Tonight? and Going For Gold. The play was originally performed at the Old Fire Station in Oxford in 2010 to glowing reviews, and deals with two friends who find out they have different ways of dealing with the loss of someone who was close to them. The play shifts between comedy and tragedy as the truth about the death emerges.

The oneACTS will be performed as staged readings beginning at 7.45pm.

Tickets are £3 and can be bought on the door. However, you can reserve a place in advance by emailing info@thecornerhouse.org and stating how many tickets you require, and giving contact names for collection on the door(please note: all reserved tickets will need to be collected by 7:30 to guarantee admittance)